Keeping track of dolphins is a slippery, patchy process. First, you must procure time on a ship or aircraft, which is expensive. After that, what you see depends on uncontrollable factors like weather, ocean conditions and whether the creatures happen to be hanging out at the sea’s surface.

As an alternative, researchers have tried deploying underwater sensors to eavesdrop on the clicks dolphins use for echolocation, which can give clues about the aquatic mammals’ numbers, distributions and behaviors. Sifting through all these data, however, becomes a new headache.

A machine learning program — similar to the one that recommends new Facebook friends to you — may be able to help. In a study published Thursday in PLOS Computational Biology, scientists from the Scripps Institution of Oceanography in California introduced an algorithm that was able to analyze 52 million dolphin clicks and identify seven distinct groups of sound. These click types, the authors speculate, may correspond to different kinds of dolphins.

Like many good science stories, this one was the result of grad student misery. Soon after Kait Frasier started her Ph.D. in the Whale Acoustic Lab at Scripps, the Deepwater Horizon oil spill happened. Wanting to monitor how dolphins were doing after the spill, she and colleagues placed acoustic sensors around the Gulf of Mexico. It was Dr. Frasier’s job to go through the mountains of data and identify dolphin clicks.

“I tried for many years to really wrap my head around patterns in the dolphin signals,” said Dr. Frasier, who is now an assistant project scientist at Scripps. “I could get somewhere, but it took a long time and was kind of subjective.” 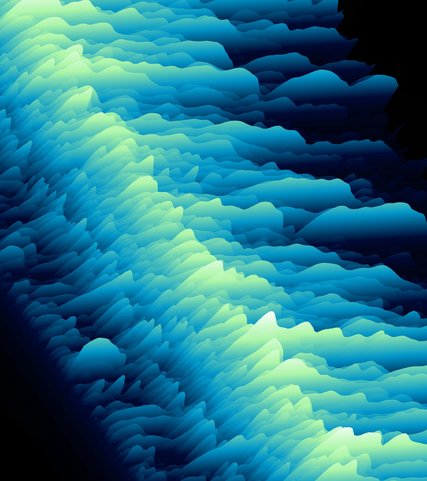 A visualization showing how the algorithm aggregates similar clicks of Risso’s dolphins to find consistent structures. Each horizontal slice shows the frequency shape of a single click. -Kaitlin Frasier

She wondered if she could leverage the machine learning techniques used by Google and Facebook — “tools literally designed for big data,” she said — to improve on the painstaking process.

The method she and her collaborators developed worked in steps. First, a detection program scanned through years of audio recordings and pulled out all segments with dolphin clicks. Their algorithm then carved these segments into five-minute blocks, generating an average click rate and frequency shape for each time window.

Next, the program grouped together five-minute chunks with similar average click rates and frequency profiles. It worked much like the online algorithms that recommend social media contacts, music or advertisements to us, though in a much simpler way, Dr. Frasier said.

While it previously took her three weeks to analyze a year’s worth of recordings from a single site, the algorithm took about four days to sort through two years of data from five sites.

Through an “unsupervised” process — meaning the authors did not train the algorithm to recognize any particular categories beforehand — the program came up with seven discrete click clusters.

One of these was consistent with the unusual click profile of a species called Risso’s dolphin, which was a “good sanity check” suggesting their method might work, Dr. Frasier said.

She and her collaborators also speculated that two of the other click types possibly belonged to short-finned pilot whales and false killer whales, both members of the oceanic dolphin family that live in the Gulf of Mexico.

The machine learning approach has exciting potential, but field studies are needed to check their algorithm’s predictions, said Shannon Gowans, a professor of biology and marine science at Eckerd College in Florida, who was not involved in the study.

For now, the researchers can’t rule out the possibility that their click types come from other factors, such as dolphins altering the sounds they make based on context, or signals being captured differently at varying distances and angles from the sensors, Dr. Frasier acknowledged.

But she’s passionate about this technology’s future. Improving scientists’ ability to track dolphin populations is not just a matter of helping dolphins, she said. Along with other marine mammals, dolphins reflect overall ocean health, meaning researchers can use them as a window into understanding changing ocean conditions.

“My goal is that we free ourselves up to ask more interesting questions,” she said. “If we can spend less time manually picking through data and assigning labels, we can start looking at the bigger picture.”